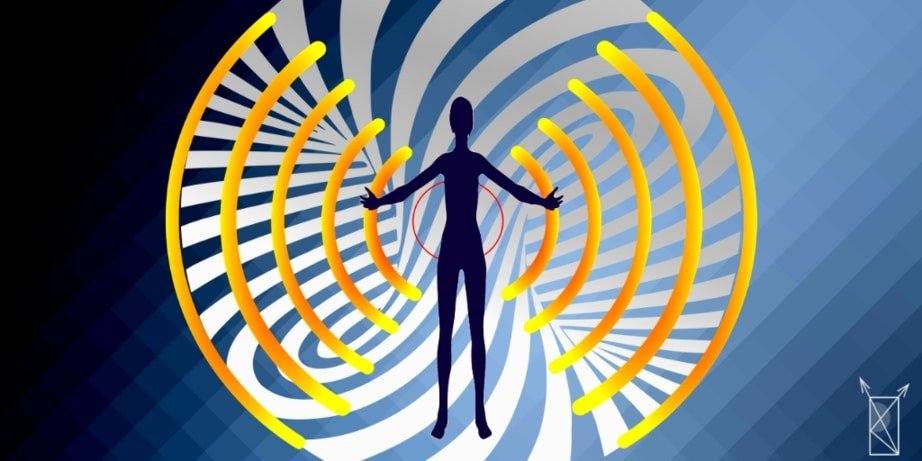 THE HUMAN ELECTROMAGNETIC FIELD – I

This series of posts explains how electromagnetism is created in our bodies and used as an information carrier. The human electromagnetic field is key to understanding how our bodies function, as it stands in between the physical body and the most ethereal parts of ourselves.

This first post will establish the key elements that enables all kinds of electromagnetic phenomena in our bodies.

2. OPPOSITE SIDES OF THE SAME COIN

The XVIIIth Century was an Era in which electromagnetism was an external phenomenon, totally unrelated to living beings. As a matter of fact, electricity and magnetism were still separate forces, so the establishment of an Electromagnetic Theory was still pending.

Franz Anton Mesmer and Luigi Galvani were born in that Era, and even in the same decade, as Mesmer was born in 1734, and Galvani in 1737.

It’s easy for me to think about them as 2 sides of the same coin.

Mesmer dedicated his work towards the magnetic realm of the human body, and was considered by many nothing else than a showman and a charlatan; meanwhile, Galvani was a respected scientist and a great contributor to establishing the scientific foundation between electricity and living beings.

He coined the term animal magnetism, and he used it in a very similar way to what Qi is to Traditional Chinese Medicine. He defined health as the free flow of the process of life through thousands of channels in our bodies. He manipulated magnets over a person to restore that flow. Later on, he realized that the use of his bare hands could have the same effect.

Mesmer could have been a charlatan. I honestly can’t discard that big possibility, but I want to think that there was at least some kind of effect. I mean, his definition of health is something that holistic practitioners and energy healers can agree to. However, we can’t be sure. He dedicated his life more towards doing his thing than trying to find a cause that satisfied scientific principles. He was no scientist, he just performed his acts in the presence of the wealthy people of Paris.

However, in an Era in which electromagnetism was barely known and considered something external to ourselves, it’s quite remarkable that he, at least, claimed the existence of animal magnetism and used magnets to heal people. Also, it’s quite curious that afterward, he discarded the use of magnets and used only his bare hands, just like a modern energy healer does.

His experiment about the electric current that twitched the frog’s leg is quite famous. This event was the spark that ignited a turf war between scientists. Galvani and Marconi couldn’t agree about the cause of that leg moving. In the end, Marconi won the debate, but the real winner was Science because it set the first relationship between electricity and biology. 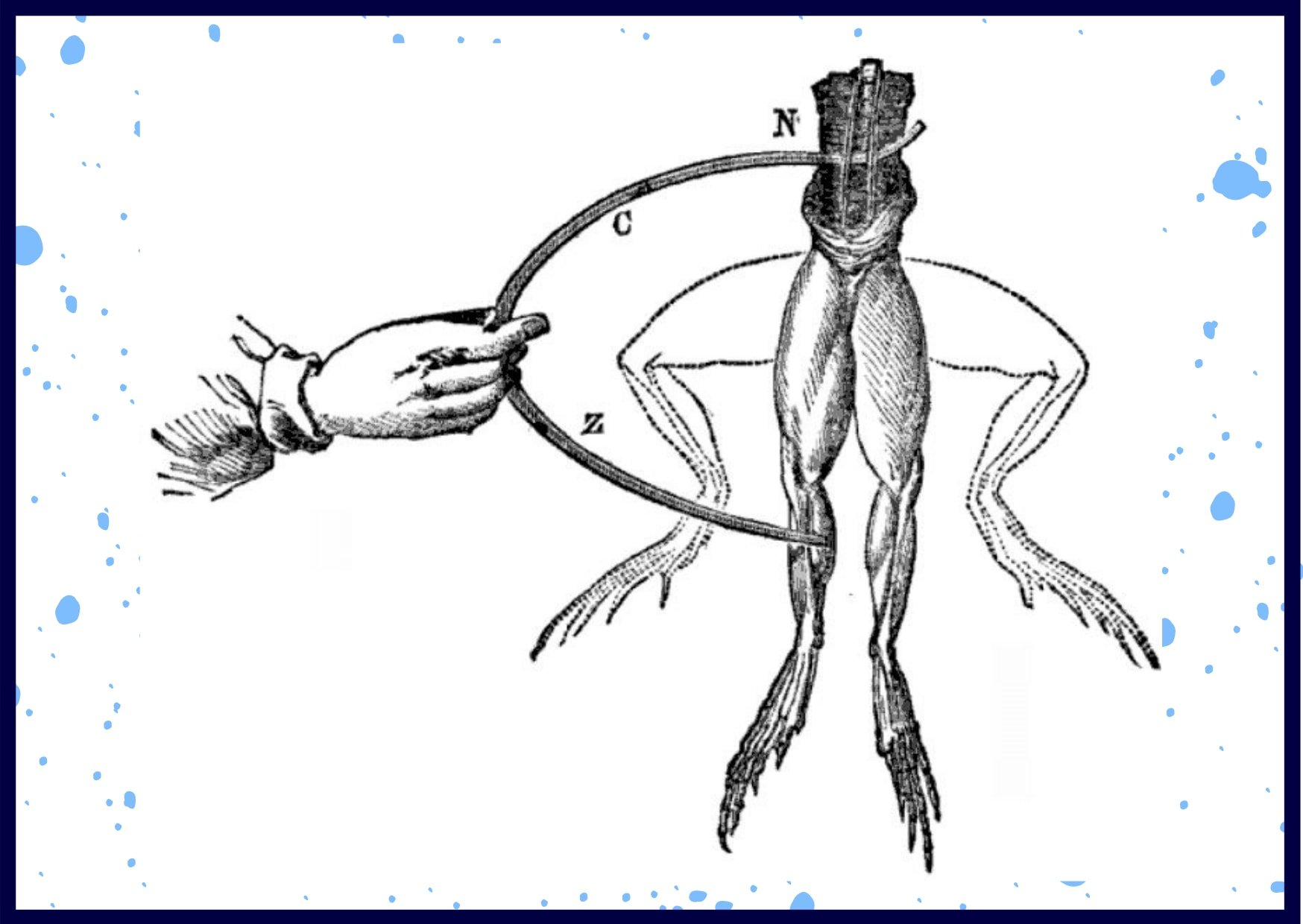 So, when Science established a link between biology and electricity, the focus was to quickly develop a technology that is nowadays known as bioelectronics, which let scientists dive deep into the electric properties of living tissues.

Human physiology became 100 times more interesting since then, as we can understand now why living beings are embedded in electromagnetism. Concepts like electric currents were being incorporated into biological structures. And now we understand how electricity works in our bodies.

The Key Element is the Cell Membrane.

This is where it all begins.

Luigi Galvani believed that animal electricity exists in a state of disequilibrium. He even determined that there was a “particular machine capable of creating such disequilibrium“.

Nowadays we know that this machine is the cell membrane. Everything starts here, this is the beginning of every other electromagnetic phenomenon, because the cell membrane separates charged particles, therefore creating a voltage, a potential. 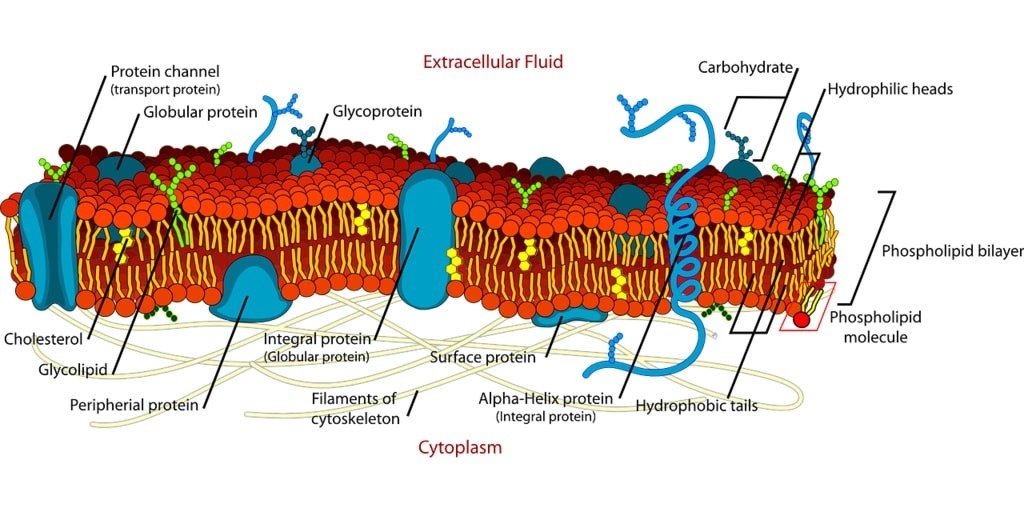 The membrane separates electrically charged molecules, creating a difference between both sides. This is a basic electric potential, it’s energy available, ready to be used. Ions with a positive charge are sodium, potassium, calcium, and hydrogen, while the ions that have a negative charge are chloride, bicarbonate, and phosphates.

The imbalance of electric charge is known as polarization, and it allows energy storage. The cell membrane knows very well how to manage this energy.

This is the Resting Membrane Potential.

In this situation there is no equilibrium. This is one of the main principles of living organisms. As Antonios Tzambazakis mentions: ‘non-equilibrium thermodynamics is an important concept for the foundations of the human bioelectromagnetic field‘. 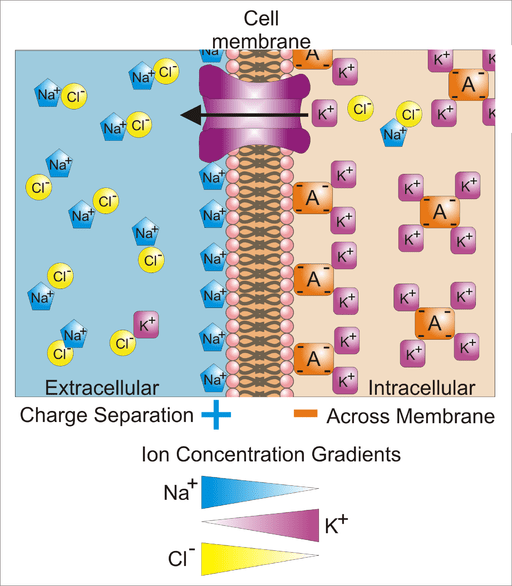 In the article Evidences for Biofield, Dr. Igor Jerman remarks on the fact that every living cell has an electric field of very high intensity (107 V/m), and a low voltage (-70 mV).

And Menas Kafatos mentions in this article: ‘a widely applicable notion of the biofield is associated with endogenous electromagnetic fields of organisms, every living cell membrane has an electric field of very high intensity, though, of a rather low voltage, this is one of the basic features of life.’

The cell membrane is so thin, that it allows several electric lines of force to cross the membrane, which is the basis of the high intensity. The separation of charges is quite subtle, this is why the voltage is low, but it’s enough to create potential energy.

This scenario allows the existence of an electric field. This force is exerted on any charged particles that lie within the region. Their movement is not random and chaotic but obeys the electromagnetic influence of this field.

This is a very important feature for the existence of Life. The cellular electric field has been linked to vital processes of cell function and body communication, such as:

Also, several scientists correlate this electric field to the Meridian System in Traditional Chinese Medicine (Reichmanis). There is enough evidence to think of the Meridians and Acupoints as Electric Highways (Syldona/Rein, and many others).

The action potential is what happens when the potential energy (those -70 millivolts) is turned into kinetic energy.

There are proteins that cross the membrane, and their function is to transport selected ions through it. In this topic, the most useful transmembrane protein is the Sodium-Potassium pump.

So, let’s imagine that we have a stimulus that reaches a threshold, this will make the Sodium-Potassium pump to introduce 3 sodiums. The electrical charge is now inverted.

If the cell that we are talking about is a neuron, then this electrical impulse flows all along the axon, creating an electric current that reaches the other extreme of the neuron: the dendrite. Dendrites transmit the signal, either by contact with another neuron, or a muscle, or also by releasing a hormone.  In either case, the stimulus has been sent to its destination.

The following GIF image shows how the sodium molecules get into the inside of the cell during depolarization, and how the potassium and sodium move to restore the negative charge inside the cell.

In conclusion: the action potential is an electric signal sent by the axon of any nerve. This electric discharge is both energy and information. Among its characteristics, we have two main features:

An important thing to consider is that if the impulse that provoked the action potential is huge, then it will lead to the appearance of several action potentials, one after the other. The coding is done by frequency, not by amplitude. Again: binary language.

Action potentials are what makes everything function: the heartbeat, the digestive process, any muscle contracting, any hormone being released, the retina processing an image, any thought, any feeling, any movement.

So far, this is the main foundation regarding electricity inside living beings. The key points in this post are the following:

“Organisms, in turn, can be thought of as electromagnetic objects containing atomic and molecular structures”

This is the first of a series: 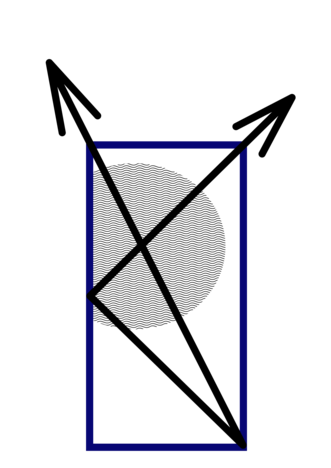