It is clear that neuroscience has the pole position regarding the understanding of consciousness. But there are many areas still to consider that play an important part in the conscious phenomenon. Many scientists are confident that just with classical mechanics we cannot decipher consciousness.

Raul Valverde has a background on research in neuroscience, technologies and quantum consciousness models for neuro technological applications. He considers consciousness as an electromagnetic energy field. Furthermore, he proposes that a brain is a machine of low frequencies, similar to the frequencies of a radio transmitter-receiver.

The Consciousness and Healing Initiative is a non-profit organization founded by Dr. Shamini Jain and whose function, mainly, is being a collaborative accelerator forwarding the science and practice of consciousness and healing. They describe and study Biofield Science, Consciousness and Healing processes. They are linking the work among scientists of different fields, integrating knowledge and facilitating the open discussion of related subjects.

So far, we can be certain that biofields are an intrinsic part of all living systems. The whole electromagnetic biofield is the sum of all systems, organs, and cells. Every cell has its own biofield, and the whole is the sum of all biofields, from cells to tissues to organs to systems to the whole body. These biofields include the electromagnetic patterns that come from the brain and especially from the heart.

The brain is a very weak biomagnetic field generator, but its importance is that it can be measured and a mental state can be determined according to its electric counterpart which falls among a simple frequency spectrum that goes from delta (0.5-3 Hz) to gamma (38-42 Hz) waves.

Dr. Michael Persinger has been studying the link between telepathic effects and brain waves. He is the creator of the famous God-Helmet, and his several studies are focused on proving that telepathy is able to happen thanks to the electromagnetic field of the Earth. Amazingly, this connection is strongest when the brain resonates at 7.8 Hz. The same fundamental frequency found in some Reiki trials and the same fundamental frequency in the Schumann Resonances.

THE HEART IS THE MAIN BIOMAGNETIC FIELD GENERATOR

Since modern medicine appeared, the brain has been the only organ in control of consciousness, but this is not entirely true. The heart has its own nervous system. Being independent and at the same time communicating actively to the brain but most importantly to the whole body. The Institute of HeartMath is making great developments in this area. The heart is the responsible of the biggest biomagnetic field of human beings.

Basically, the heart can be considered as a low-frequency magnetic pulse creator. I have written about how SQUIDs can detect magnetic biofields, but nowadays exist modern sensors that: “successfully detected the weak but regular magnetic pattern of the heartbeat, and the same signals were recorded using the SQUID“.

The enteric nervous system consists of a mesh-like system of neurons that governs pretty much any activity at the gastrointestinal tract. It consists of 500 million neurons, and this might seem low compared to the brain, but it is equivalent as 5 spinal cords. It begins in the esophagus and extends down the anus. Nowadays is accepted as separate from the autonomic nervous system, since it has its own independent reflex activity, and is commonly given the nickname of “second brain”.

More than 90% of the body’s serotonin lies in the gut, as well as about 50% of the body’s dopamine. The hunches and gut feelings are clearly related and in need of further study, there could be a biomagnetic shift whenever a hunch or intuitive moment arises. This information (intuition) is being controlled by the unconscious, but with training and/or meditation one can gradually acknowledge the feelings and information that is being processed. The result: being more aware of biomagnetic shifts and their meaning.

Modern medicine implies that our mental and emotional states impact our immune and cardiovascular systems in a manner that can influence disease as well as health. Now important universities as the University of California at San Diego hosts events regarding Consciousness, Biofield and Healing. 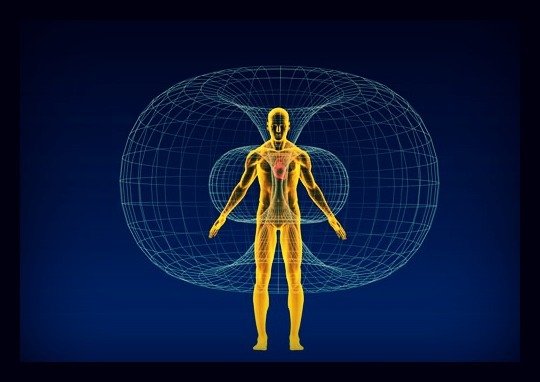 Electromagnetic field of the human body